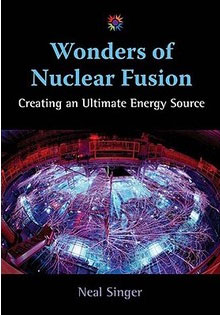 With accessible writing, Neal Singer introduces young readers to what fusion is--and isn't. He explains the ways scientists have approached and developed fusion and discusses its advantages over other forms of energy production.

Mention nuclear fusion--the joining of two light atoms to form a heavier one--and most people think of bombs. But fusion has other uses, too. Inside an encapsulated space at Sandia National Laboratories in Albuquerque, New Mexico, scientists test the Z Machine, a pulsed power structure that uses electricity and magnetism to produce nuclear fusion. Although much of the research has focused on the development of nuclear weaponry, the Z Machine--along with the ITER machine in France and the National Ignition Facility in California, also discussed in suitable detail--may also help scientists find a way to harness fusion energy in order to provide clean, renewable energy to the world's growing population. The Center for Southwest Research, with funding from the National Endowment for the Humanities and The Center for Regional Studies, continues to digitize newspapers from around New Mexico in support of the Library of Congress' Chronicling America Project

The Albuquerque Evening Herald served New Mexico’s most populous city, located in Bernalillo County.  By 1900, Albuquerque had 6,238 inhabitants and nearly doubled its population to 11,020 a decade later. Albuquerque expanded along with the railroads, including the New Mexico Eastern which by 1909 had extended the town’s trading area to the Texas state line.  Newspapers in Albuquerque competed vigorously with fifteen weekly and six dailies produced between 1900 and 1912.  Read More about the digital new mexico newspaper...